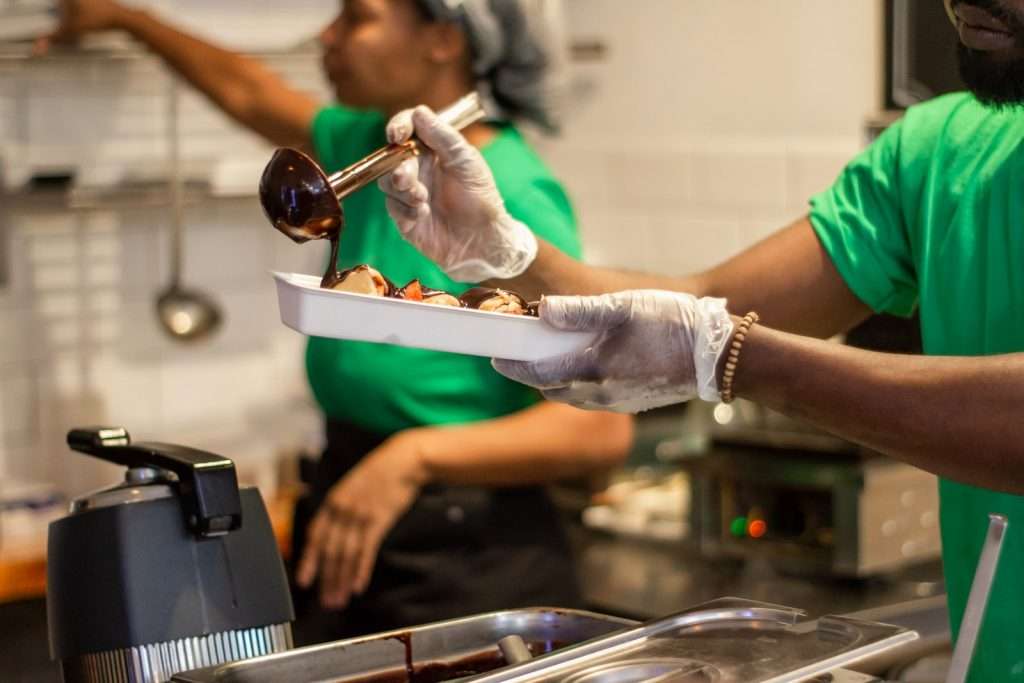 Prepare for Part 7 of the Reading and Use of English paper in the B2 First Exam by reading the text below and answering ten questions.

For questions 1-10 below you need to choose the relevant section (A-D) where the information can be found. The sections may be chosen more than once.

You can check your answers by clicking on the “Answers” tab at the bottom of the page.

In which section does the writer mention:
1
that Velveth found it difficult to give up her unhealthy diet?
2
the negative effects of forcing people to lose weight?
3
that Velveth wasn’t always overweight?
4
that Velveth wouldn’t be able to afford eating the same way where she was from?
5
additional benefits of Velveth’s weight loss?
6
that people usually live very far from each other in Oklahoma?
7
something that happened causing the city to tackle the obesity problem?
8
that Velveth’s job made it easy to eat an unhealthy diet?
9
that the residents were taking responsibility for their own weight loss?
10
that people rarely used to walk anywhere in Oklahoma?

Velveth Monterroso went from a healthy weight to obese during her time living in Oklahoma.
A

Oklahoma is a city that covers six hundred and twenty square miles, but has a population of just over half a million. This means that the residents are all spread out across the city making it nearly impossible to go about your daily life without using a car. As a result, people tend to do very little exercise, which has contributed to Oklahoma being known as one of the fattest cities in the United States. Velveth Monterroso was a victim of the city’s reputation after she arrived from her hometown of Guatemala. She initially weighed a healthy sixty three kilograms, but after ten years her weight went up by over thirty kilograms.

Velveth noticed the difference from her hometown of Guatemala immediately. She commented that in Guatemala people would usually eat a diet consisting mainly of vegetables as meat was so expensive. In Oklahoma, however, it was much more common to eat fast food on a daily basis. She soon found herself eating the typical diet of the city at the time. She worked long hours, starting at eight in the morning and not finishing until eleven at night. This made it difficult for her to find the time or energy to prepare healthy meals. Working all day as a cook, she found herself constantly snacking on burgers, chips and pizza throughout the day and would usually get a takeaway on the way home after a long day at work.

Even after stopping work to look after her second child, she was still addicted to the junk food that had caused her health to decline. She was finding it difficult to make any meaningful changes. By now, the city knew that there was a serious problem going on, and decided to declare a war on fat which was started by the Mayor, Mick Cornett. He found out that his own weight increase had made him clinically obese just as his hometown was identified by a magazine as one of America’s most overweight cities. One of the changes made in the war on fat was a special programme to reduce obesity that was offered to people who were overweight. It was thanks to this programme that Velveth managed to change her life. Now she eats fast food just once a week, cooks more vegetables, has smaller portions and exercises daily by walking up and down stairs for twenty minutes. Although she is still overweight, in just four months she has lost nearly ten of the kilograms gained since moving to Oklahoma.

All her friends were impressed not only with the weight loss but also with the amount of energy she now has. Velveth wasn’t the only one who benefited from the city’s remarkable attempt to tackle obesity. Many more have taken advantage of new plans implemented by the city including the creation of parks, bike lanes, gyms and various walking trails across the city. Overweight people throughout the city are being targeted at home and at work to change their lifestyles. Rather than making residents change their habits by banning sugary snacks and drinks, the campaign is focused on educating people so they can make the choice to change. This approach appears to result in more people maintaining a healthy lifestyle instead of just losing a few pounds and then going back to old habits.

Reading and Use of English | Part 1

Health, fitness and exercise are topics commonly used in the B2 First Exam. Practice you vocabulary knowledge with these ten...read more

Reading and Use of English | Part 2

The Life Of A Personal Trainer

Practice your vocabulary knowledge for part 2 of the Reading and Use of English paper with this text extract about...read more

Going To The Gym

Practice your speaking skills with this sample exam questions for part 3 of the speaking paper. This question is all...read more

Try this practice exam question for part 3 of the speaking paper all about running a business. Part 3 is...read more
Cookie Consent
To provide the best experiences, we use technologies like cookies to store and/or access device information. Consenting to these technologies will allow us to process data such as browsing behavior or unique IDs on this site. Not consenting or withdrawing consent, may adversely affect certain features and functions.
Manage options Manage services Manage vendors Read more about these purposes
View preferences
{title} {title} {title}